The learning is never complete. I believe you must hone your craft with continuing education.

I’ve decided to spend the next few months honing my craft with continuing my education by adding to my tool box with a self-prescribed course which I’ll detail further below. But first a chunk of numbing biography so you can understand why I’m still craving knowledge. 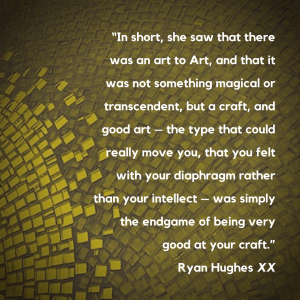 Feel free to skip to CHOOSE YOUR OWN ADVENTURE.

I finished my MFA two decades after received my BA in professional writing. My first real success came as a playwright after getting close but no cigar with my first book deal in my early 20’s while still pursuing that BA.

Looking back now, I’m happy that success as a novelist didn’t happen. The agents and almost deals made me feel like I was on the right track and this professional encouragement kept me grinding.

But I needed life experience. I needed to expand my horizons. And I needed to observe the world and learn new skills. I have no doubt I would no longer be writing if I’d been published then.  I would have been pigeon holed in a genre that I loved, could imitate, but had no mature connection.  I would struggle to write one potboiler after another. And to find another agent is a time and soul consuming affair.

Maybe I wouldn’t and movie money would have set me on another path, but I can see it going worse in more ways than better. I did get a great rejection story out of it and a bizarre agent call– that’s important too at the bar.

And then I went back for my MFA. Twenty years later. That thesis novel is, of now, available for purchase in finer indie book store and is being translated into Russian as we speak, so to speak.

Since the Fountain sold, I wrote a follow-up and sold it to the same publisher. It is experimental inspired in part by classic novellas such as 1984, Clockwork Orange and the mosaic structure of Jenny Offill‘s Dept. of Speculation, a book I adore for its use of narrative negative space (I just made that up), where nothing is on the nose, and nothing is stated outright. It’s an engaging pay-attention read.

But since it’d been ten years since I’d last wrote a book of this style (Satire, Literary, Transgressive.), having spent way too many years on TV pilots and screenplays (fodder for another blog) –  I decided to read Consider This by Fight Club author Chuck Palahniuk – I never did receive a response to a typed letter to him. And among the funny book tour stories were tools, he’d accumulated and put to good use.

I picked up a couple of his tools along the read , but more importantly, I felt I had a form of several he mentioned. Augmentation, not devastation.

CHOOSE YOUR OWN ADVENTURE (or WRITING CAN BE TAUGHT) 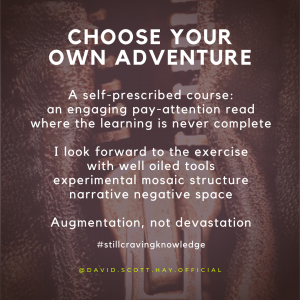 Alan Moore – an early and huge influence on my approach to writing, so much in fact, I have a piece of original comic book art (including a typo) from the comic my mom gave me that changed my interest in writing and I also have said comic book framed. – has done a series of lecture videos (BBC MAESTRO series).

Thus far, he is cheeky, whip smart and thorough, but also emphasizes the worthiness of such pursuits.

I look forward to doing the exercises.

EDIT: I have also added Mark Forsyth‘s The Elements of Rhetoric. 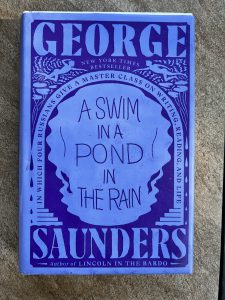 George Saunders – A Swim in the Pond in the Rain at Midnight. George Saunders takes several Russian authors and their stories and breaks them down into why they work, why and what tools they are using in their process. It’s a large volume and I suspect, I will dip in a chapter at a time. If the Russians are reading me, and ZOOM readings may be a thing, I’d like to be more familiar with their giants.

And then Kurt Vonnegut and his Pity the Reader: On Writing with Style. I haven’t read much of his work, but I did see him lecture in 1996 in San Antonio, Texas and it was a  glorious and magical evening. I feel like I will be more amused with his personality and advice than his actual writing. Maybe not.

Getting awfully white in here.

And I’ve picked up a couple of Robert Bolaño books. Last Evenings on Earth was a perspective shifting read for me when The Fountain was gestating, so I thought I’d return and read Cowboy Graves (3 novellas) and Nazi Literature in the Americas. This book is nothing but fictional biography of fictional fascist-leaning poets, writers. A fake literati history. Dry, ironic, and funny.

I love fake history and had done something similar in The Fountain in a fake Wikipedia section (XX also has a fake Wiki section, but I did it first, dammit).  This I imagine will spur me to actually read my copy of Pale Fire by Nabokov with its parallel narrative / commentary running in the footnotes section (a more contemporary example of this style would be The House of Leaves by Mark Z. Danielewski).

That’s a lot of men (but an international cast).

Have no fear, as I am editing a fantastic story collection by Anna James Dickson called The Girl in the Piñata. I’m learning as much from her as she is from me. 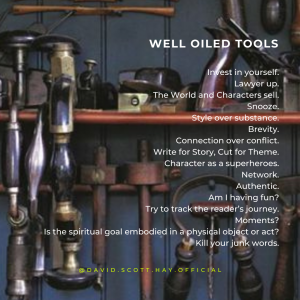 While I’m off doing this, here’s a hodgepodge list of my own tools and guiding principals for writing. Not all my tools, but more high level advice I’ve accumulated through failures, successes and advice given to me by other professionals that I have found true.

Take a look and see if any of it resonates with you enough to put in your tool box.

That’s it for now. Exciting things on the horizon for The Fountain and other projects.

Meanwhile, here’s a link to an interview I did with Damien Roos at [PANK] magazine.

Here’s a link to books for writers beginning their journey and one to take you to the next level.

Here’s a link to more advice from famous people that has served me well. Some may look familiar….