DSH Picks Your Poison – Mixology for the Author Life 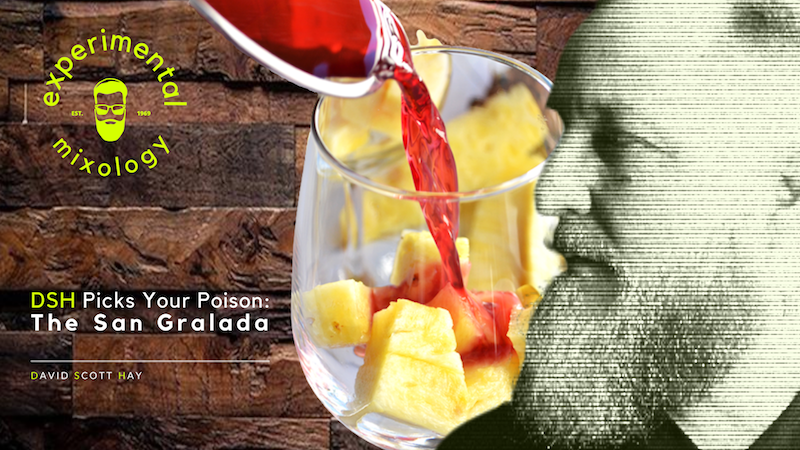 What’s in the Drink Special? Experimental Mixology for the Author life.

“Sometimes you just need something fruity and stupid.”

I love pina coladas.
I love sangria.
Let’s start there.

I purchased a pack of coconut carbonated water. We drink copious amounts of flavored carbonated water like it’s, well, water. And having grown bored of Lemoncello, I thought I’d give this one a chance. 50/50 it would taste like ass.

I had a hankering for one or the other – actually I just needed a drink and wished I could have one of them. But I didn’t have the ingredients for both so I sort of just mixed some things together. Red wine, ginger ale, carbonated coconut water. I dubbed it the San Gralada.

And told no one.

I was invited to appear on The Signature Cocktail Show with Kyle Hamman. I couldn’t do my signature Old Fashioned (the secret is in the simple syrup) as it had been done recently so I thought I’d bring the San Gralada. Heh.

On the show, I asked Kyle to taste the coconut seltzer straight from the can. He sipped and gagged and proclaimed:

He’s not wrong. Then I told him it was only the second time I had ever made the drink. Heh. Made for good TV. You can watch the episode HERE.

We finished the recipe, toasted, and then, huh… Another sip.

That’s…. well, let’s not spoil anything.

The Steps
(this is really simple. it’s lengthy cuz I’m padding with chuckles) :

Level up CRAFTSMAN and check out my FAVE FIVE book recommendations for writers: Beginner or Advanced.
Support Indie Press – Order My Latest Release, THE FOUNTAIN here

Suggestions for your own Experimental Mixology for the Author Life Series? Send me a message HERE.