Last summer I was approached by Polyandria NoAge, a Russian publishing house out of St. Petersburg to do a Russian translation of The Fountain. Plans were made to help launch the book with an overseas visit. And then war. After navigating the new situation, the book is now slated to be released there this September (translation by Anastasia Rudakova). They have been great to work with under crippling circumstances.

To have a book with a slight anti-authoritarian bent being released in a country at war controlled by state-sponsored media was not on my BINGO card. We are currently discussing organizations which would benefit from the donation of my advance.

Here’s Part I of an interview I did with them recently. 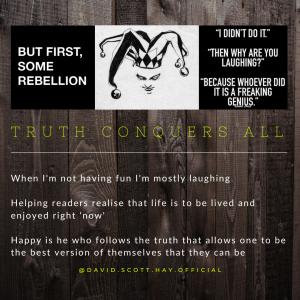 Who do you consider yourself more – a writer, screenwriter?

Short answer: Lennon and McCarthy would call me a paperback writer.

Long answer: Different ideas are more appropriate for the stage versus screen versus print. My published body of work includes: essays, liner notes, a comic book story, novels, and produced stage plays and a movie. So, I consider screenwriting another branch of my writing tree.  These days, I’m swinging from the prose branch.

Of course, getting any of those screenplays produced or even read is a whole other exhausting endeavor with a massive failure rate. I’m lucky to have gotten a feature movie project across the finish line when I was a bit younger.

What do you like most about your work and, conversely, least of all?

Most: The process of problem solving needed to create a story that is entertaining and thought provoking.  Also, setting my own hours or letting myself believe I set my own hours. 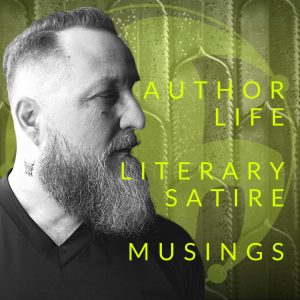 Long Answer: I like the challenge of problem solving and working out the puzzle of a story. Putting my own spin on a certain genre or story. Also, I am genuinely interested in the themes I explore and often learn a bit about myself and the world along the way. Sharing that experience in a way that is accessible, without being pandering or pedantic, is key.

I use humor and absurdity as a spoon full of sugar or a Trojan horse, pick your metaphor. When it’s successful, it’s a great feeling. When it’s not, at least I’ve put off folding laundry in the name of art.

Marketing your book from behind a keyboard is exhausting. Especially with social media. There’s a lot of noise and nonsense out there and trying to cut through it is frustrating. I’ve found I love going to book fests and connecting with readers at signings and other events. That has been very rewarding. That face-to-face interaction is worth more than any social media engagement. Literally there is no ROI for the publisher on likes or cartoon hearts

Have you experienced creative block? And if so, how did you deal with it?

Long Answer: I’m usually working on two projects at once. They’re usually in different stages, so I have the ability to bounce back and forth without getting lost in the process. Often ideas come for one when working on the other. This also prevents me from getting anxious about what I’m going to work on next. I like having a plan even if I deviate from it. 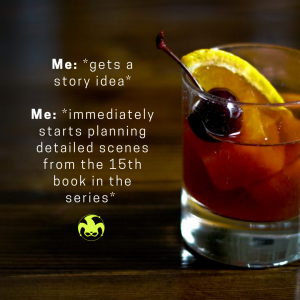 This worked for me for quite a long time, until I decided to write a YA trilogy. The first book took 3 months to write – it just flowed. But I got stuck twice in Book Two. I just couldn’t solve a corner I’d written myself into. So, I took a break for a year and wrote NSFW my follow-up novel to The Fountain.  My publisher, Whisk(e)y Tit Books snatched up NSFW, and so the risk of not finding my way back into that trilogy story world was worth it.

But there was no guarantee she was going to buy it. When I turned back to the trilogy, I couldn’t solve another problem in the third act of Book 2. I got to the point where I wasn’t sure I’d be able to crack it. Then suddenly on a family trip, involving a lot of Mai Tais and a tropical storm, I found my way back in with a very simple solution; I finished a draft of the book over the next few weeks. That was such a relief.  But now the two projects will be in the same world so I won’t have an escape valve. It’s a high wire act for me, but like I said, I enjoy the challenge. And I’m happy I’m still pushing myself.

Are you still reading? I found that previous paragraph earnest and straight forward. I can’t imagine a reader having a reaction more visceral than a yawn. This is why we fictionalize or dramatize things. I tell young writers just because it happened to you doesn’t mean it’s interesting.

I guess the better answer is: daydreaming. I deal with writer’s block by day dreaming of what if? That’s what The Fountain and NSFW are at their core: explorations of what if by an American sitting in a tent in his backyard being berated by broody chickens.

– Speaking of fiction, who are your favorite authors and what books? Do you follow the state of foreign fiction or prefer modern US-writers?

Short answer: The last books to blow me away were Children of Time by Adrian Tchaikovsky, The Throwback Special by Chris Bachelder and Cinema by Samuel Kaye. One is How did he do that? The next is Why didn’t I think of that? The last was a stellar example of how to stick the ending by subverting expectations but elevating everything that came before it thematically.  It was pitch perfect. I think all are masterpieces in their own right. And I am a harsh, if forgiving, critic.

I’d also be remiss if I didn’t mention I’m currently editing a collection of stories Boys Buy Me Drinks (To Watch Me Fall Down) by Anna James Dickson for my American publisher Whisk(e)y Tit. I’m very excited about its release this spring.  She writes delicately and authentically about intense subjects. Her writing makes me very aware that I should be reading more female writers.

I am not as versed in non-US writers as I would like, though I do love Robert Bolaño, the Chilean writer.  There’s a touch of his influence in The Fountain.

George Saunders’ A Swim in a Pond in the Rain, a book about the craft of Russian authors, is sitting on my nightstand after having been kidnapped by my wife (who is also an amazing writer).

My favorite rereads include Do Android Dream of Electric Sheep? by Philip K. Dick, Fight Club, by Chuck Palahniuk. Misery by Stephen King. These are novels that captured my imagination when I was younger and I still find delightful in their own way. 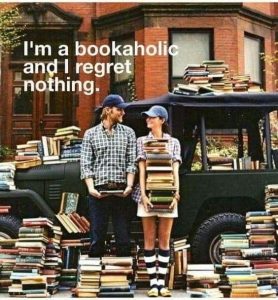 I try to read as much as I can, but I have a habit of buying more books than I can finish, and I find I don’t finish most books. If a book doesn’t fully engage me, I have no problem setting it down. Occasionally, I’ll give it another shot, but usually not. I’m very susceptible to the idea of a novel and sometimes find just buying a novel, saying with my pocket book that this is worthy of consideration, is enough. I tell folks at readings they don’t have to read The Fountain, they just have to buy it.

I also love the storytelling that comes from singer/songwriters, especially folk and Americana artists. To feel like you’ve gotten a full emotionally satisfying story in three minutes is amazing. Of course, the music helps convey emotion, too, but the economy of words that songwriters use is a skill that definitely helped me early on with screenplay writing. And good writing will give you an emotional journey, it weaves a spell, no matter the medium. 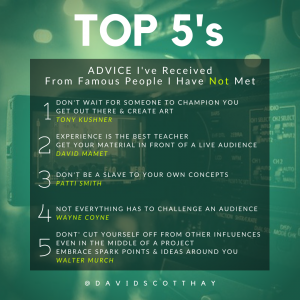 These days, I’ve been reading more and more small press authors. It is shocking the unique voices and stories that bigger American publishers have dismissed as not being commercial enough. But that very notion spurred Miette to found Whisk(e)y Tit Books.

– There is an opinion that critic is a failed writer/artist. Do you share this belief? And how do you deal with criticism from journalists / readers (if you encounter)? Should an author respond to criticism?

Short answer: In the case of Duckworth, I drew on a couple of critics I knew, one was indeed a failed playwright. He was not kind to most other playwrights’ work. Some can transition, others cannot. He’s dead now. I did not kill him.

I used to respond to criticism when I was younger. And that is a fool’s errand. 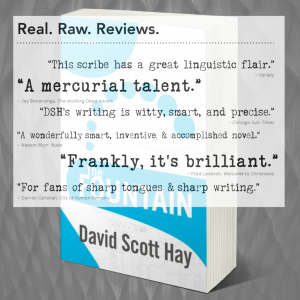 – How long did it take you to write the novel – developing characters, plot, working with text?

Longer: That’s an interesting question that ties directly to the book. Does the backstory / process of writing it heighten or validate the work itself? Would you think differently if I told you ten months or ten years? And if so, what would your reason be for that? I feel like, for me ,that is when you truly start to participate in art.

It took me a life time to get there.

That being said the next book took a year from conception to acceptance. But that was a very interesting year.

– Could you please tell us a little about your plans? Future books, films, scripts?

As I write this, I’m at the Bay Area Book Fest for a signing and a reading of The Fountain. In June, my publisher and I start production on my next novel NSFW, a cross of satire and horror. It follows two new social media video moderators desperate to make it through the job’s probation period, though they have to witness numerous heinous and gross acts. It explores how much we can take and what are we willing to do to ourselves for a job that barely offers a survival wage. Their coping mechanisms include sex, drugs, and a jellyfish. It’s Kafkaesque.

I think it’s darkly funny and weird and bleak and angry. (Side note: I’m pleased to announce I’ve been given permission to include Russian poet Anna Akhmatova’s You Will Hear Thunder.) 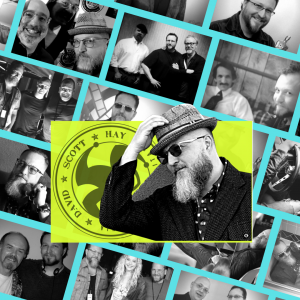 LINK TO WHISKEY TIT – The Fountain