Evolution of the book cover for my new novel NSFW. 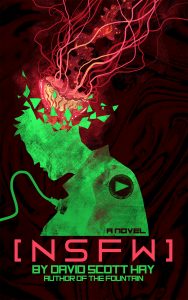 Not going to lie. I LOVE the cover for my new book NSFW. I’m going to SWAG this mother so much it’s going to be embarrassing. Yes, I’ll be opening a swag store on this site.

It started with an author concept mock-up I do in the middle of a project to help visualize — and to procrastinate but still feel like I’m working. (see below).

Tyler Miles Lockett is the amazing artist and a hell of a writer and… drum roll… he wasn’t supposed to do this cover.

I discovered Tyler on IG. I subscribe to a number of subreddits. News, stocks, for fun, satire grist, and art.

I saw Tyler’s post on IG and was struck. His style was perfect for an upcoming project. But that project was a trilogy. Not that he couldn’t and hasn’t done a trilogy–I’ve seen the art. And it sold me.

But that’s still a big commitment for the biggest project I’d written (am writing) thus far, I hesitated a bit. I’ve have new vendors and artists become more challenging than I care to tolerate.

Delay after delay hit the cover designer assigned to NSFW. So, I’m sure, at the chagrin of my publisher, I hired Tyler to take a stab at NSFW. This would give us a great test run.

(Also the bigger publishers give you little to no input in the cover. I prefer to have my hand in all aspects.) 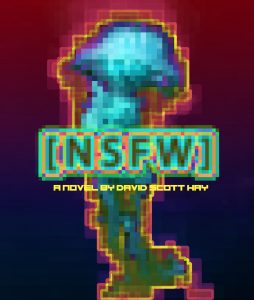 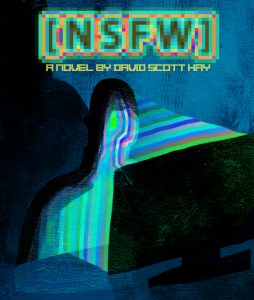 Tyler jumped in feet first (I use all my cliches in my emails and blogs). These are two test concepts he did. I was thrown a bit and had a harder time visualizing these as a finished cover as opposed to a just a concept. So Tyler suggested we backtrack, so we spitballed some ideas and the next submission from him gave me a large choice of concepts…

To me (and Tyler had not read but a few chapters and only knew the general outline) the jellyfish was an important icon to the story and I felt it needed to be part of the cover, if not THE cover.

I love the tentacles forming the humans, but felt it again didn’t fit the tone quite right for the narrative. There are a number of themes and threads that run through NSFW, so it was important to capture the essence of it, while maintaining the twists and turns. 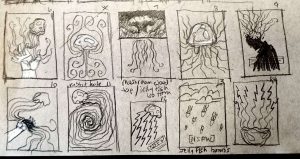 I found several of them to my liking so we eliminated the easy ones and chose the ones to explore more fully. I love #9. I think the nuke cloud as the head of a jellyfish is brilliant – but not quite the vibe for this one. Same for #13. Jellyfish bombs, made me laugh, but tonally didn’t fit the story. Sometimes you have to explore different concepts just to eliminate them.

Normally, I would have passed on 11, but Tyler had sent me samples images of a graphic design title and I could see how it might possibly work, so I wanted to see options. You  never know when something might surprise you. Tyler is convinced the dark values of 9 sold me. But it was inverting the jellyfish /brain explosion that I thought was fresh.

I’d also sent Tyler a picture of the cover for TENDER IS THE FLESH. Which inspired the images below.

Again, interesting but not stronger than other choices. 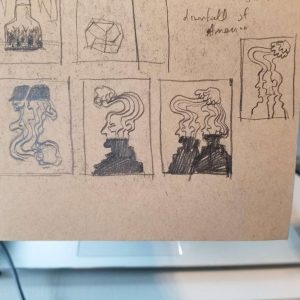 Then this feast came over: 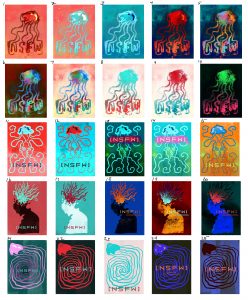 I immediately fell in love with the color scheme. The book uses quotes from Mary Shelley’s Frankenstein, and I used that metaphor for the digital age, so the green, a nice mix of matrix green and Frankenstein green was a must.

My concern at this point was how the jellyfish would look. These were rough concepts and I needed to have faith Tyler would be able to execute. I think those were his words. Heh.

At this point we zeroed in on the image and color scheme. 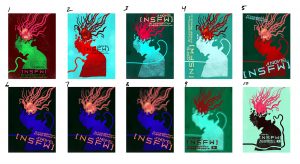 I knew I wanted #1, but was unsure of the red background color. It officially has a slight tint, but I’ve seen other proofs where the color is lost. Which is fine. Probably helps the cover pop a bit without being quite so busy — which was a concern.

Also 4 kept calling my name. Not sure if its the cord coming from the back or the text on the side or the fact I liked the light on dark silhouette.

Fonts and jellyfish. As you can see the difference in the jellyfish between one and two is spectacular.

I suggested the PLAY symbol as seen by my rudimentary red triangle. Tyler cleaned that up and we agreed it balanced out the composition. Then we nailed down the font and arrangement. The negative space to the right will probably be used for the Kirkus blurb. 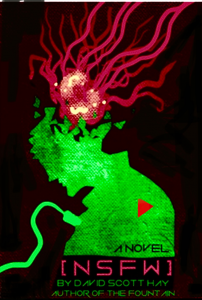 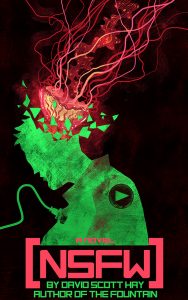 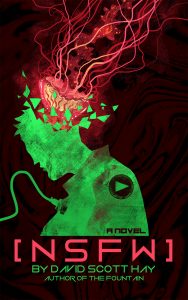 And then you ask your buddy to animate the cover into this cool trailer.

The back cover and spine went quickly. You’ll see that when the book is out.

Which one would you have picked?