Drink special: Whether or not to pursue an MFA in writing. Based on the author following and then not following advice from Pulitzer-winner David Mamet. Part 2 of the grad school writing program blog. (pours drink)

As promised here is the open letter I sent to my MFA podmates. Additional commentary in italics. Here is Part 1.

Each of you will be receiving your marked up pages with my indecipherable line notes and suggestions. I keep a copy, so if you ever feel the need for clarification, I’ll be able to refer to the gibberish that graces your stories.

Now that being said… something I’ve noticed after reading these submissions, and perhaps it’s been true for most of the previous submissions as well, and that is this:

There’s a dearth of camera movement. Emotionally, as well as technically.

It’s as though the writer’s mind’s eye is stuck at eye level twenty feet away, in a medium shot. Everything is described as you would see on a safe TV show. Every action, description or emotional reaction seems to have the same weight. A line or two, a few well chosen adverbs. We never seem to zoom in on an object, let alone an emotion.  (And by “every,” I mean in a general, but dominant sense.)

A great technical example would be the opening to THE LOVE OF A WOMAN and the examination of the deceased ophthalmologist’s tool.  It’s a bit more akin to Eastern filmmaking where one opens a movie or a scene on an object that resonates thematically. Western filmmakers have a tendency to open on the dreaded establishing shot.  (A cityscape, the Brady house, the Seinfeld diner).

Nothing is ominous, devastating, ornate or intricate. Everything seems to be given the same perfunctory muted weight.  And this applies to emotions as well. And sometimes this is fine, as in a muted stabbing to death with a bagel knife (XXXXX, you gotta make that a bagel knife, not a bacon knife– set-up, pay-off).

That distancing has a chilling effect, but when the whole piece has that weight, it tends to read cold. I feel like the stories are just going through their paces and I don’t mean that as hack pieces, because clearly there is some strong talent here– please understand that. As the late (definitely) great (box office speaking) movie producer Don Simpson used to say regarding a script: Where is the moment?

Current me interjecting here re: where is the moment? There are two kinds of moments, the ones that surprise you – think Sam L. Jackson in Deep Blue Sea. And the ones you build up, the ones where we all know where it’s heading, where we hope it’s heading, and are craving for it to be satisfying.

What is your promise as a storyteller to your audience? Think Luke v Darth. Or Avengers: Endgame. We waited ten years for Cap to say “Avengers Assemble” and kiss Agent Carter. Yes, we knew a few moments were more than likely to happen (confronting Thanos, Cap wielding Mjolnir) and what a nice surprise to give us a moment we had given up on – that dance and kiss with Agent Carter. (I use movie examples as a more common frame of reference.)

What I don’t sense is an intention in the writing. A driving force.  Or an emotional investment. It’s more of a so, that happened. Not the work of a writer with something to say, let alone an exploration of themes or meditation on larger issues.

We seem to be for the most part plot or vignette driven. I for one would like to see some abstractness or dirty laundry hung on these plotlines. None of the authors seem to be putting themselves out there.  I don’t see any blood on the page. 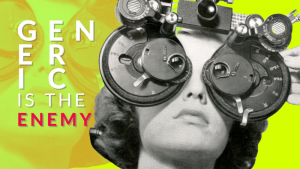 One of the first assignments I give in my playwriting and screenwriting is to make a list of your deepest personal beliefs. It can be pages and pages or a list of bullet points. A list of human traits you admire, a list of traits you despise. What are some of the greatest things a human can do? The worst? Give examples. What were some of your darkest moments, your brightest? Your life motto?

I see several amateur FB writing groups post cries for help that they want to be writers, but don’t know where to start. (???) This is where you start. Do a self-assessment and discover what is important to you.

Now that you have that down on paper, you can mine it for stories, characters, and structure to enhance and enrich your initial concepts.  I mean, aren’t stories supposed to be vehicles for this? I’ve seen your math, pod-mates, I’d love to see your jazz.

Me again. Theme and a point of view is probably one of the last things to master. It’s hard. But it’s also a good guide if you’re looking for direction in a scene. You have endless choices, but which contribute to a theme? What is it you want to explore? Filmmaker Steven Soderbergh gave the best advice that I use today when stuck:

Write for story, cut for theme.

And I’m not talking about some emotional manifesto or some self-grandiose shouting from the mountain tops. The number one thing in writing a screenplay is structure. And to a lesser extent fiction. Use your math (structure and plot) as a Trojan Horse to deliver your jazz to compliment and explore your fears and hope and dreams.

Fill that Horse with your blood.

And don’t worry about making something accessible and universal. Down this path lies the worst enemy of all: the generic. Remember the more specific, the more universal. One writer in our large group sprinkled his work with razors of specificity.  “I drive a two-tone green ’79 Grand Prix and live in a warehouse with no heat.” Everyone remembers the shitty car of their lives. By being specific he nudges us to remember specifically what our shitty car was and thus bonding with our storyteller. Generic is the enemy.

And maybe these are pieces that are leading to something greater, maybe it’s the pressure of having adult lives and deadlines. And perhaps, I’m projecting. Perhaps, I could be guilty of the same thing in the early stages of The Fountain. Satire does retain a certain distance, but going forward I’m trying to be more cognizant of the emotional gravity of the piece.

So, make a bloody mess, my fellow scribes. Call forth the sharks.

Your friend of the Text,

Click here to order The Fountain by David Scott Hay.