Here is the second of a four part interview with David Scott Hay by the Russian publishing house Polyandria NoAge about his novel The Fountain and the upcoming Russian release (Sept 2022 – Translation by Anastasia Rudakova).

This is a shorter section and talks about various spark points for the books, especially characters. Nearly all of them began as recognizable stereotypes, but as layers and POVs are revealed, I found they took on unexpected characteristics. It was a joy to excavate these characters as they wrestled with the temptation of the Fountain.

– Heroes in the novel, do they have real prototypes (in the present and in the past)? What events in the art world or exhibits inspired you to write the novel? 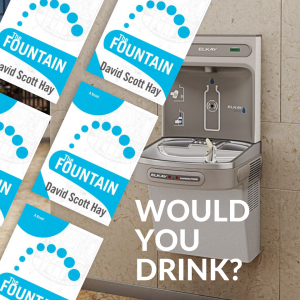 Short answer: Yes. It was a trip to the Museum of Contemporary Art in Chicago. I saw a water fountain next to a kiddie exhibit and had a flash of what if…? I couldn’t shake it. Since I worked with and near designers as well as being a theatre producer, I was exposed to a myriad of artists with varying skills and philosophies, not just mediums. Sadly, 9/11, in addition to a local Chicago tragedy years later, informed me in how seismic events could affect the art world.

Also, if memory serves me, a Lee Bontecou retrospective at the same visit was very inspiring and I loved her art. She was the inspiration for Tabby. But I also found her back story fascinating all on its own. She became famous in the ‘60s and then in the ‘70s dropped out of the scene and no longer exhibited, but kept making art in her barn.

Longer answer: B and Higby are actually based on real people. The websites listed in the book are, in fact, 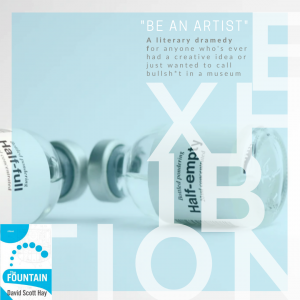 their official websites. B was a painter turned sculptor and Higby is a furniture designer for whom I build custom furniture. I got to see how the businesses were run, what kind of clients they had to deal with and the drive to be creative, in a world that doesn’t necessarily encourage that. I have several of Robert Bellio’s pieces in my home, a picture of one is in The Fountain. I saw that piece go from sketch to finished product. Being present at its birth, as it were, certainly impacted my approach to The Fountain.

Those two are the inspiration for those two characters and the world I was working in at the time. Most of the other characters are fiction though with a dash of myself thrown in there. Then they are named after friends of mine. In fact, one told me the other day he was mad at our other friend whose character killed him in the book. He was mad he didn’t make it to the end and was mad because it was our friend. It wasn’t planned out; it was just how the story flowed.  That is a rare laugh you can share with someone and I like to make sure I have personal connections to the book, too. Maybe it rings with a dash more authenticity, if not humor. 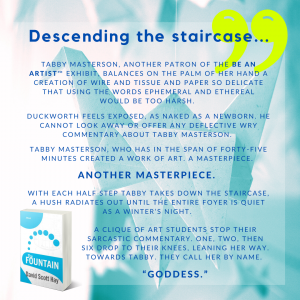 Ross Robards – Modeled after a comedian’s take on Bob Ross. I heard a comedy routine 40 years ago (though the ponytail paint brush is of my own device (this may have been the most pretentious parenthetical) aside I have ever written)). (Next to this one.) When I started writing The Fountain and was trying to think of a commercially successful artist that bit came back to me.

I thought how would that kind of character respond to the fountain situation? What kind of perspective would he have, and in the end I felt his was the most emotional and humanist. Though the origin of the character was a joke, his character and his POV ended up being one of the major tenets of the story. Stolen like thief, fenced like an artist.

-Which character in the novel do you like most of all?  Is it difficult for the author to remain impartial 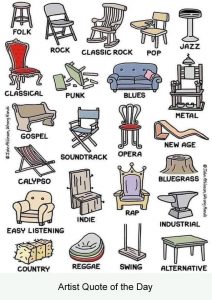 As far a as my favorite character, that’s a hard one. Each one has their own journey and foibles and wants. Duckworth was a bit more caricature in the early drafts. Fun to write his desperation and lack of self-awareness or rather his distorted self-awareness.

But on subsequent drafts I found the yearning and humanity in his character.  I understood his drive much better and where he was coming from, he was more sympathetic if not less ridiculous with his performative manners. That’s the difference in making a character a stereotype and giving them a complex inner life. You might judge these characters upon first meeting them, and my goal is to get you to change your opinion as you learn more about them for better or worse.

I think for me I can’t remain impartial; I have to imbue every major (and most minor) character with a bit of my own hopes and fears or experiences. I have to relate to them and understand them. Which makes it much more harder to kill, ha!, but without connection you have conflicts that ring hollow.

Confession time: Jawbone is my favorite. And I won’t tell you why. 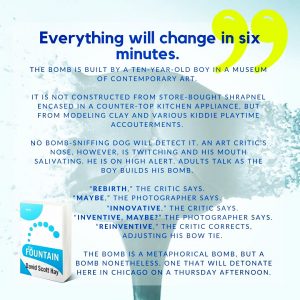 LINK TO PART I