Here’s Part III of my interview with Polyandria NoAge, publisher of the Russian translation of The Fountain (Oct, 2022, translation by Anastasia Rudakova).

Mostly me grousing about modern art.

– What is contemporary art for you? Do you like it more than old art? Or the interest is rather her professional – for you it is nothing more than an object of close study in your novel, as well as the art world itself? 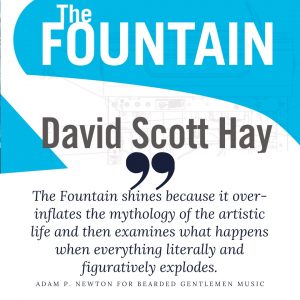 Short answer: The more abstract an idea is, the more subjective it is to bullshit. And thus, my attention to its intent and craft is much higher. Because of that, I think I find contemporary art less successful.

Also, “old art” has been vetted by time. Who can tell what contemporary art made will be talked about in a hundred years?

That being said, I enjoy art, both the process and the result, which is as we know can be hard to separate. And should we even try? That’s a major question that is explored in The Fountain.

Longer answer: Contemporary art for me is a hard. I need to see craft and intent and hopefully something that inspires me, or at least causes me to consider a new point of view or spark an idea of my own.  If I feel someone is slapping something together in the name of art or being controversial in place of talent or craft, I have a tendency to dismiss it.

I do respond to upcycled art where people have repurposed things to make art (Sculptor Robert Bellio, the inspiration for B in The Fountain, does this exquisitely with old farm tools). And those pieces usually rely more of humor or familiar things.  That kind of art I find thrilling because it takes something you have registered as an object with official purpose and forced me to consider a new concept regarding an already established connection. This kind of art literally causes new neurological connections. Literally mind-expanding. Someone shitting in a bucket and calling it art, not so much.

I think with the Old Masters and artists there is no question as to authenticity and craft, but modern art can be subjected to more arguments and didactic thinking. And of course, I wanted the unexpected artists in The Fountain that create masterpieces to have done so at a kiddie exhibit with toys as opposed to traditional mediums. I wanted the impact to come from children’s toys. It just made me laugh and also heightened the impact of the fountain.

I think with any of my stories, I find a concept that interest me as a human, and if I can examine it from different points of view, I can have fun exploring and discovering. And there might be people out there with the same curiosity.  I don’t write for particular audience, though my wife, an amazing writer, is my trusted reader, and I know if it works for her, it’ll work in general. She keeps me honest and also keeps me from out clevering myself, which is a consistent temptation.

But since she hasn’t read The Fountain yet, she gets zero credit for any of its success. (she’s laughing now).

– People who are engaged in contemporary art creating today, do they have a sense of irony or self-criticism? Your novel is extremely ironic, to say the least – it makes fun of the ambitions of some mediocrity. Have you received any offensive comments from representatives of the art community after the release of the novel? 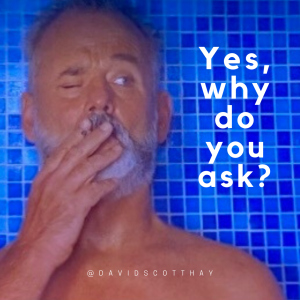 Short answer: Thus far, I’ve only received reviews from people who have recognized the book’s intention. But it’ll happen sooner or later. In its embryonic stage, someone thought The Fountain was just making fun of artists. Which is not the case at all.

I’ve received death threats for a stage play before, I’m not too worried about criticism from other artists. If you’re a true artist nothing will stop you. Except maybe one’s government.

LINK TO PART I